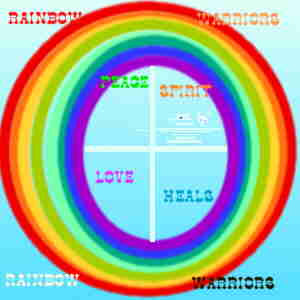 "Know your garden" - -- one of ten statements from the traditional Hopi Elders as told to Cho Qosh Auh Ho Oh, a Chumash/Yaqui/Maya Indian

When the whole Earth is your garden, there is a lot to learn and know - but when your garden is in your back yard, all those back yards add up.

These instructions in prophesy are similar to the end times prophesies in the Bible in many respects as well - all come back to how Mankind is behaving, how we treat each other and the world we live in.

Know your garden indeed. Know every plant that you can eat when the time comes that things do not work as you'd think they do now. As the boyscout motto says, "be prepared."

Compost. Give everything back to the Earth that we do not need. Leave vile substances buried where they belong. Keep the world we were set here to care for clean and pure and filled with life and love.

These are the simple things in our hearts we all KNOW we should really be doing.

Somehow, we must break the insane cycles created by rampant capitalism and find a way to temper the capitalist system and it's technologies so that they are in perfect harmony with nature rather than trying to defeat nature.

It is time for us to join hands and become the Rainbow Warriors - the men and women of all races who work together to heal this world, whose weapons are peace and love, who finally bring technology, nature, and spirituality together into a unified existence that creates a free, loving, just world for all mankind.

We, the "ordinary people" must come together in order to achieve the extraordinary and bring this world into the Creator's plan in a fashion that shows we have accepted our responsibilities as the Creator's children and are finally growing up.

It is the only way to end the viscious cycles of greed imposed by the so-called "elite class" - who have proven themselves to be nothing but the ultimate in selfishness and soulless non-compassionates. In the end, if we do, perhaps even these people may regain their souls.

If we fail and let things go down the path of destruction, there may be very few of us left to pick up any pieces that might remain.

Time is short - time is now - now needs to be love.

Rev. Daniel
Posted by AquarianM at 9:12 AM No comments:

Email ThisBlogThis!Share to TwitterShare to FacebookShare to Pinterest
Labels: Stewardship


Global warming is destined to have a far more destructive and earlier impact than previously estimated, the most authoritative report yet produced on climate change will warn next week.

A draft copy of the Fourth Assessment Report of the Intergovernmental Panel on Climate Change, obtained by The Observer, shows the frequency of devastating storms - like the ones that battered Britain last week - will increase dramatically. Sea levels will rise over the century by around half a metre; snow will disappear from all but the highest mountains; deserts will spread; oceans become acidic, leading to the destruction of coral reefs and atolls; and deadly heatwaves will become more prevalent.

The impact will be catastrophic, forcing hundreds of millions of people to flee their devastated homelands, particularly in tropical, low-lying areas, while creating waves of immigrants whose movements will strain the economies of even the most affluent countries.

'The really chilling thing about the IPCC report is that it is the work of several thousand climate experts who have widely differing views about how greenhouse gases will have their effect. Some think they will have a major impact, others a lesser role. Each paragraph of this report was therefore argued over and scrutinised intensely. Only points that were considered indisputable survived this process. This is a very conservative document - that's what makes it so scary,' said one senior UK climate expert.

Climate concerns are likely to dominate international politics next month. President Bush is to make the issue a part of his state of the union address on Wednesday while the IPCC report's final version is set for release on 2 February in a set of global news conferences.

Although the final wording of the report is still being worked on, the draft indicates that scientists now have their clearest idea so far about future climate changes, as well as about recent events. It points out that:

· 12 of the past 13 years were the warmest since records began;

· ocean temperatures have risen at least three kilometres beneath the surface;

· glaciers, snow cover and permafrost have decreased in both hemispheres;

· sea levels are rising at the rate of almost 2mm a year;

And the cause is clear, say the authors: 'It is very likely that [man-made] greenhouse gas increases caused most of the average temperature increases since the mid-20th century,' says the report.

To date, these changes have caused global temperatures to rise by 0.6C. The most likely outcome of continuing rises in greenhouses gases will be to make the planet a further 3C hotter by 2100, although the report acknowledges that rises of 4.5C to 5C could be experienced. Ice-cap melting, rises in sea levels, flooding, cyclones and storms will be an inevitable consequence.

Past assessments by the IPCC have suggested such scenarios are 'likely' to occur this century. Its latest report, based on sophisticated computer models and more detailed observations of snow cover loss, sea level rises and the spread of deserts, is far more robust and confident. Now the panel writes of changes as 'extremely likely' and 'almost certain'.

And in a specific rebuff to sceptics who still argue natural variation in the Sun's output is the real cause of climate change, the panel says mankind's industrial emissions have had five times more effect on the climate than any fluctuations in solar radiation. We are the masters of our own destruction, in short.

There is some comfort, however. The panel believes the Gulf Stream will go on bathing Britain with its warm waters for the next 100 years. Some researchers have said it could be disrupted by cold waters pouring off Greenland's melting ice sheets, plunging western Europe into a mini Ice Age, as depicted in the disaster film The Day After Tomorrow.

The report reflects climate scientists' growing fears that Earth is nearing the stage when carbon dioxide rises will bring irreversible change to the planet. 'We are seeing vast sections of Antarctic ice disappearing at an alarming rate,' said climate expert Chris Rapley, in a phone call to The Observer from the Antarctic Peninsula last week. 'That means we can expect to see sea levels rise at about a metre a century from now on - and that will have devastating consequences.'

However, there is still hope, said Peter Cox of Exeter University. 'We are like alcoholics who have got as far as admitting there is a problem. It is a start. Now we have got to start drying out - which means reducing our carbon output.'


Useful links
IPCC
UN framework convention on climate change
Posted by AquarianM at 3:23 AM No comments: